It’s midnight by the pier. I check I’m alone, feel nervously into my pocket and count the money with my fingers. It’s all there: 40 massive sacks of coins. Big pocket. I flip up the lid of the wheelie bin and dump the lot. 4 million bells erased from the universe and no one need ever know.

How did it come to this? Shovelling currency into the garbage in the dead of night? Well, you may not be aware that Animal Crossing: New Horizons‘ playtime materialism has spiralled into a greedy, underworld sub-game with a powerful pull, that Nintendo never planned to make. I had binned my integrity long before the bells. I wanted out. 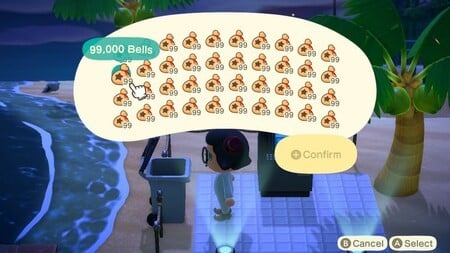 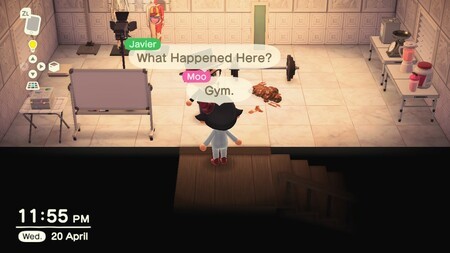 For many people, spring is when Animal Crossing is in the air. Those early pandemic days were when we first stuck our heads in the desert island sand and let the fantasy cast us away. So I recently felt the itch to revisit my old home, confuse visitors with its weirdness, and see the new trinkets added in update 2.0.

My go-to site to browse the game’s catalogue is Nookazon – the unofficial item exchange for islanders wanting to trade but lacking a private community to do so. After all, I can quickly acquire anything listed, thanks to my fortune from the turnip boom of 2020.

I found that since 12 months ago, the NMT had halved in value against the bell. One reason was predictable, another unforeseen. A third event, though, was so calamitous that the entire Animal Crossing economy may collapse

Surprisingly, loads of interesting stuff had arrived since I last looked, so I started a shopping list to smarten up my paradise. As ever, furniture items originating randomly in the island shop were abundant and cheap – “cheap” being a few hundred thousand bells or so. With tens of millions in the bank, you don’t even think about it.

Villagers, however, remained the big-ticket status symbols. For the evergreen Raymond, say, bells won’t suffice. Nook Miles Tickets – a grind to obtain and of little use in-game – emerged early on in the game’s life cycle as a high-value currency. Last year, an inventory of 400 NMT was worth about 10 inventories of bells – 40 million. Since New Horizons requires you to carry, drop and pick up your trading currency one inventory slot at a time, and to fly between islands, disconnecting and reconnecting through an infuriating online play system to refresh your inventory, a 40-million bell trade was never tenable. NMTs solved that problem.

Now, I know this is all a very long way from the slow-life, lazy-days activity of “pure” Animal Crossing, so bear with me, but those playing the markets depend on occasional scores of a few million bells to sustain their wanton shopping practices. As perhaps it is for the real-life rich, money doesn’t mean anything to us – it’s a technicality we have to click through while just getting whatever we want.

However, I found that since 12 months ago, the NMT had halved in value against the bell. One reason was predictable, another unforeseen. A third event, though, was so calamitous a shock that the entire Animal Crossing economy may be about to collapse.

The first reason was that the market gradually flooded with NMT. Without much of a purpose in-game, NMTs never get used up; they just circulate between players, with the supply gradually increasing as players “mint” more by grinding. Bells, meanwhile, are consumed in-game by every player, spending millions on mortgages and island developments. Once spent in-game, bells are out of circulation, naturally limiting supply. Having foreseen this eventuality back in the boom days, I hedged my capital investments across bells and NMT to reduce risk. This paid off, and I came back this year to a healthy portfolio.

The unforeseen change, however, was the Automatic Bell Dispenser. The ABD is a new (as of 2.0) cash machine item that can be used by island visitors. The ABD removed the island-hopping from multi-inventory bell trades and rendered, say, a 12-million-bell trade suddenly viable. Bells grew in spending power through sheer practicality, improving their appeal to Nookazon traders, and reducing the demand for NMT.

So the market settled at about 50,000 bells to the NMT – until the third, cataclysmic event: “treasure islands”.

Treasure island owners hack their islands to load them with megastore rows of desirable goods, then open up for visitors to fill their pockets (often in exchange for Twitch engagement, meaning potential real-world cash). For many, including me, that crosses a line between manipulating Nintendo’s built-in gameplay and straight-up not really playing the game at all. Without even getting into Animal Crossing economics, it undermines the wholesome, hardworking aspirations of fellow castaways nicely swapping furniture.

But it’s kind of intriguing, don’t you think?

Of course – of course! – I would never seek out a treasure island. But, with increasing frequency, they came to me. A trader hanging out on my island offered a “free” visit. I saw several Nookazon profiles cheerily noting their 900-million-bell bank balances. Vibe: “I’m in the club – are you?” Two others offered to pay for major commodities trades with treasure island access instead of bells.

As my annual ACNH enthusiasm waned, I realised that, this time, I may never come back to the game. I felt I should explore one last aspect of its weird and wonderful player community. I stepped over the line. 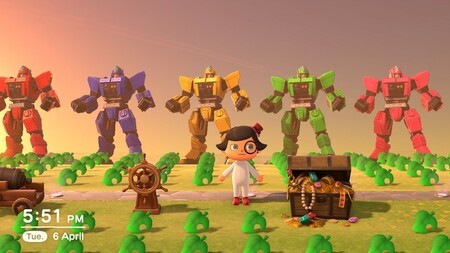 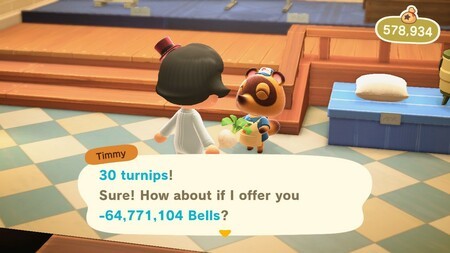 Following Nookazon-chat instructions from a fellow trader, I inputted a dodgy dodo code and boarded the plane. Maybe, I thought, my game would be corrupted or, in one way or another, I’d get some merciless comeuppance. But having exhausted two years of enthusiasm for the game, I decided, so be it.

As my annual ACNH enthusiasm waned, I realised that, this time, I may never come back to the game. I felt I should explore one last aspect of its weird and wonderful player community. I stepped over the line.

The treasure island was a bizarre place. The terrain was levelled for neat aisles of items, categorised and clearly labelled. The language of ACNH is inescapably concrete and tangible: to get dodgy wares, you need to literally walk around and browse.

Another player was contemplating froggy chairs like a retiree comparing supermarket avocados. But, instructed by my Nookazon colleague, I skipped it all: I was to proceed directly to Nook’s Cranny, the island shop, collect exactly one stack of turnips, head in and sell them. The price offered was minus 65 million bells – bankruptcy, surely! There went nothing: I pressed ‘A’ and whispered goodbye to Animal Crossing.

But back home, I checked the ABD, and sure enough: a flabbergasting 999,999,999 bells. I wasn’t sure really what to do. With my fair-and-square 70 million from commodities trades, money was already no object. What difference now? In the end it was just an interesting experience.

“I think I’ll go and pay off someone’s mortgage,” I said in the Nookazon chat. “That’s nice,” came the reply, “I’m going to buy a 50-foot robot.” There was honesty in that.

When someone did visit to receive my charity, they told me their entire mortgage, that they dreamt of repaying, was – wait for it – 374,000 bells. What?! What an absurdly paltry amount! I would often have that much rattling around my pocket after a bit of shopping. It shamed me that I could have been paying off mortgages left, right and centre for the last couple of weeks. Here I was injecting dirty money into the innocent island economies of hard-grafting, as-Nintendo-intended players, sullying their escapism with my unseen greed, when I could easily have been a genuine Robin Hood all along.

There was no way to undo what I had done. Now, if I ever wanted to trade – my favourite part of the game, in case you hadn’t guessed – I would be weeing putrid hacked bells into the global pool. No way to undo it at all. Unless… 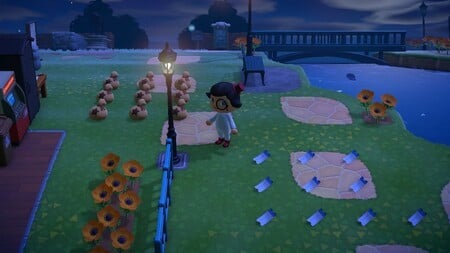 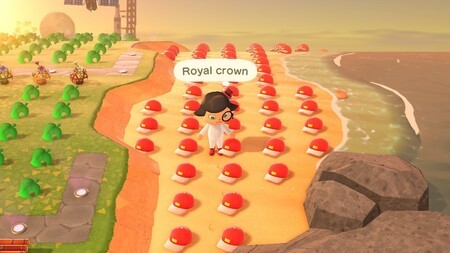 Throwing a billion bells into the bin is not a small job. Thanks to that delightful one-inventory-load-at-a-time system, I needed to withdraw, carry and dump 250 lots of 4 million bells – at 39 seconds-a-pocketful. You do the maths.

I don’t know if that act of penitence can amount to my absolution, but in any case it would take more than just my billion to rescue the Nookazon economy. As of now, the NMT has sky-rocketed to year-ago prices. More troubling is that substantial trades are perilously scarce. With so many bells sloshing around, no one wants any more of them. The kind of people who have hundreds of NMT to trade away are no longer seeking cash. Most big NMT listings are asking for collections of items the sellers are seeking, effectively amounting to personal shopping requests.

So what does the future hold? This diminished fungibility of NMT will affect their value; gold and wood may return as reliable commodities, or the whole capitalist trading culture may simply collapse in on itself. Perhaps from the rubble will emerge a more humble custom of bartering items for items – things actually to be used, not stockpiled. In turn, treasure islands will lose their appeal, as merely amassing wealth does less good.

Having scrabbled into the darkest grottos of greed, I won’t pretend my own tropical paradise could ever be so innocent, but I hope players of purer heart will be left with the game Nintendo set out to create.