Rogue Legacy 2 is finally out, and we know a lot of fans can’t wait to jump straight into the thick of it!  For newcomers though, the beginning can be pretty daunting, so here are a few tips and tricks to help amateur adventurers get into the flow.

Get Rich or Die Trying – Manor Gold Upgrades:  Rogue Legacy 2 is a pretty tough game, and the beginning can be overwhelming for some players.  Your Manor has a ton of upgrades to help you overcome these challenges, but there’s a lot to sift through, so here’s a few skills we recommend new players seek out.  The very first upgrade in the Manor gives gold bonuses to the Traits you choose, but it doesn’t stop there.  Skills like the Repurposed Mining Shaft increases Trait gold bonuses, while Offshore Banking allows players to slowly accumulate gold until they can afford more expensive things.  They may seem costly, but purchasing them early will give you a swift advantage.

Mastery XP OP – the Sage Totem:  Purchasing stat upgrades in your Manor isn’t the only way to power up your character.  Unlocking the Sage Totem will grant you access to Mastery XP, which allows each hero class to naturally become stronger the more you play them.  Even better, these strengths are permanent and carried over between classes.  Players that purchase the Sage Totem and diversify the classes they play can get quick and easy bonuses that will really help early on.

Gotta Catch ‘Em All – Heirlooms: We don’t want to spoil too much, but when scouring around the Kingdom, be sure to stay on the lookout for Heirlooms.  They may seem ominous and daunting at first, but remember, fortune favours the bold!  You may not succeed in their challenges the first time, but for the persistent and eventually victorious, you will be given the biggest rewards the game has to offer.

Show Me Your Moves  – Spells and Talents:  Don’t build bad habits!  Try casting every ability you have, even if no enemies are around, just to help you understand your character’s strengths.  Yes, your weapon is strong, but each hero class also has a unique Talent, along with a random Spell, and using them all is the key to success.  Mana is plentiful in RL2, so don’t be afraid to experiment!

Another Level to Combat – Skill Crits:  Once you’ve grown accustomed to using all of your abilities, you can start taking things to the next level with Skill Critical Strikes, also known as Skill Crits.  Every Weapon and Spell in the game has a way to deal extra damage, such as dashing while attacking, or hitting enemies at the peak of your blade strike.  Not only are these Skill Crits immensely satisfying, but they become stronger as you become more proficient.  Learning the nuances will ensure you can cut down the most powerful foes in short order.

Master Mobility – Spin Kicks:  There’s a reason why we have you Spin Kick so many times in the tutorial.  In Rogue Legacy 2, the Spin Kick is life.  Mastering it adds a new degree to both your platforming and combat repertoire.  In fact, it’s so versatile that you can beat the entire game with that one move alone.  It’s not recommended, but it is possible (yes, someone has done it).

Practice Makes Perfect – The Architect:  We’ve taken great pains to make sure every boss in Rogue Legacy 2 can be beaten without taking a hit.  It takes a ton of practice, but fortunately there’s an easy way to keep trying until you become that good.  Once purchased in the Manor, the Architect will give you the ability to lock down the Kingdom and prevent it from changing.  If you’ve found the boss room already, a locked Kingdom means you can battle the boss over and over, as they are merely a teleporter away.

Pro tip: Spend an heir or two just dodging the boss’s attacks, and see how long you can last.  By focusing purely on defense and not worrying about offense, it’s easier to learn the boss’s attack patterns and timings.  Once they’re all figured out, you can bring the fight to them.

Play Your Way – House Rules: Even after following all these tips, Rogue Legacy 2 still has a steep learning curve and you may still struggle.  Or maybe you don’t want to invest so much time, and instead want to relax on the couch and chill.  Everyone’s different, and House Rules lets you tweak the experience to your own liking.  Raise or lower the difficulty, toggle contact damage, and even slow time down while aiming to let the game run at your pace.

Play however you want, and don’t worry, there is no punishment for using House Rules.

That about covers the basics to help you get started.  Before you even touch the controller, remember that Rogue Legacy 2 is more than just about fast hands and quick reflexes.  Equipping yourself with the right knowledge and the desire to persevere is just as powerful.  This guide is only the tip of the iceberg, so be sure to keep learning new things as you play the game.  There’s a ton more to seek, discover, and most importantly, enjoy.  Thanks for reading, and we hope you have fun with Rogue Legacy 2. 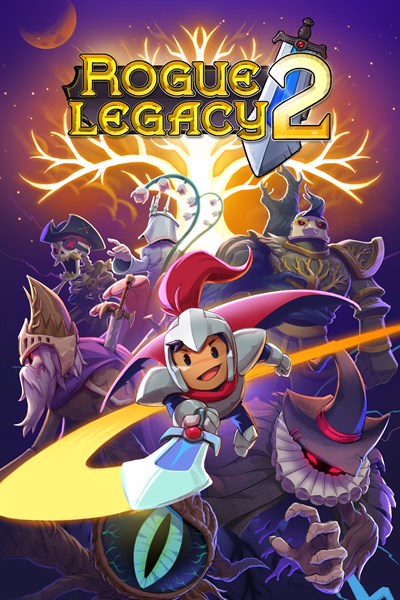 Rogue Legacy is back! But now it’s got a 2 on the end of it!

Rogue Legacy 2 is a genealogical rogue-LITE. That means it has all the trappings of a typical rogue-like (randomized runs, changing characters, and more), but with persistent upgrades, and persistent dead heirs. In this game, your legacy defines you. Spend your parents’ inheritance and grow the family manor to give your children a better fighting chance. Each child is unique, with their own traits and abilities. Your daughter could be a Ranger. She could also be vegan. It’s a new experience every time. Rogue Legacy 2 also lets you play how you want to. Go hard and fast, and dive deeper into the depths of a randomly-generated world. Or take it slow and steady and build your character up until you’re ready for greater challenges.